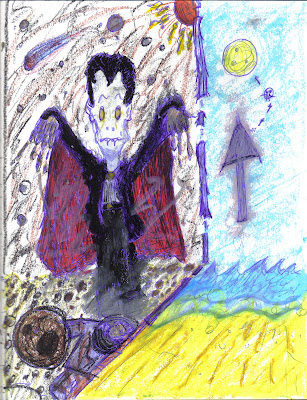 So we are roughly 8 songs deep on a record right now- we're writing constantly and growing infinitely- the leap from the last album to this one is mind blogging as the depth, the significance, and the performances are that much more involved, detailed, and aware

the stars are leaving

2) This is the Age, We Do Not Age- instrumental hip hop song, I am thinking of re-doing the vocal takes, as I am sticking to the original crappy wavs bc i captured a moment in time, it is more conceptual rather than aesthetic
3) Questions of Rebellion- track has vocal ideas set, but there is a lot to be done with this song and i dont see finishing it until i am able to spend more time with it after attaching ideas to all the songs

Initiate robotic stake cold capture and contemplate the unknown regions of the universe
If they take this task, they make this path, then it will awaken the knowledge of our uniform
anonymity
Before me there is a map
Around me there is a sea
Above me are his pearl white fangs
Below me there is a way

We washed ashore
And saw everything and anything as pure
Live lavish,
then you’ll be (flow fast)
singing savage,
on and on you
go through the fray
You’re a time warp (pause)
Into the
Cerebellum, antebellum
Of the record now (spit fast)
Spinning on and on for endless days
Pause
We have scratches to save
Your monies exchanged
The melodies of (spit fast)
Our iron butterflies (spit fast)
Spreading their
Invisible wings (spit fast)
We spread salvation indefinitely (spit fast)
In slow motion, the planting of seeds (spit fast)
Lest we (break)
leave (Break)
no thief behind (draw out)
We got six pairs of eyes and
A mouthful of cries

Break with music, write some type of bridge- maybe water sloshing and drums isolated, with organ from the ending- creates consistency
Tossing and turning (spit fast)
Like a spindle weaving a warning (spit fast)
Grooving thru (spit fast)

5) Untitled (Flickering Lights, Struggling Youth)- the beginning vocals are set, they have a more upbeat vibe, but this is vital, as I would like to establish this type of variability now rather than later
Untitled
Wrinkled coats in summer months
Street lights flicker on
Raised forehead
Dried blood
Near her swollen eye lids
She asks for change and they turn away
Then continue on,
Beneath a misty fog
Do you hear that train rattling on?
Well,
It’s only life
Our day to day (say over :30 in song)

Who are you anyways?

I’m passing by
Watching shoes fly
He tackles a newspaper bin
And I can see the crazed look in his eye,
Looking into mine
And I swear I see myself

6) Not For Sale Sign- three parts: a) set in an attic, the preacher is franticly recording his thoughts to his congregation after seeing visions of the Galactus, of Bela Lugosi cleansing his universe of the diabolically ambitious race of humans b) part two is the ramblings of the preacher realizing the horror of the end, the realization of the facade that has been religious beliefs, there is more to fear than heaven and hell, that there is a God who cares not for their whole well being and nurtured souls but for mere entertainment, how can they stop this? c) The service is held on a cold london morning, the pulpit is shaking as the congregation sings of the devil's temptation to buy the soul of man to imprison the creation, "Ahhhh there's something he'd buy!!" The chorus rings out, the people realize the grave nature of the future, questions arise, rebellion is promised, and the camera and author pan out from the church to see the preacher writing more and more but adding layers of detail to the future prophesy

Not For Sign
(for verse- come in at start of song

after first break- do a spoken word piece as below:

(spoken at a whisper, british, raspy, unrecognizably a whisper of conscience in the right or left channel, the music is now set behind to allow the listener to hear the words of the preacherThere’s something he’d like to buy
He with his long face, piercing black, beady eyes
Yet realized like phosphorous rising from the damp earth of reconciliation
The minerals of discontent revealed like pornographic obsessions and filtered drug induced sunsets where he sits yet writing of our amusing stories, writing of our frequent miseries and marginal pleasantries wrapped in the divinity of flesh
This is the price for our forgiveness, this eruption from the bowels of the planet, in the fiery furnace and core where fiery lions with as many heads appear with thunder and winds and
brimstone calling for you to behold:
His fires will taste you,
they will lick their lips of your flesh, break you
singing of karma of heavens of virgins of everlasting hell
Men fighting men and chewing the flesh, tasting the impurity
Of death revealed in the absurdity of life as they themselves
Feel their bones chewed upon by the gnawing, binding feeling
bubbling with the beginnings of our great lost world
the beginnings of our genesis, our adam and eve
see through me
see beyond me
look within me
you’ll find
the creature of wants and needs
that will betray you
as his cold blank countenance looks
upon you

3:53
in the downward sloping
cigarette tide
there lies
the truth you compile
as the type writer
types
it’s keys
pale white lengthening
your fingernails
slide
so bleached
straw hair bent back reveal to me
show me your confounded spine
show me

you’re as crooked
as your blood thirsty crimes
do they
comfort thee?
Floating in the waves of a long distant sea
Could be
The timely decree
Of a minion of the devil who became
Our God
But can it
Awaken thee
Let the heretic be absolved of this
Take me to an infinite bliss
Show me

7) Piano song- Untitled- no ideas as of 9/29/07
8) Behr Ave- vocals complete, one change dynamically, add synth organ over second minute with an added extension to ambience, adds another dimension and highlights the vocal performance on the second half of the song- 00:30 seconds probably will be added, but it is a short song as of now, so extra room to breathe may better it

Overlooking Behr Ave
with this head in these hands

trying to remember what it may 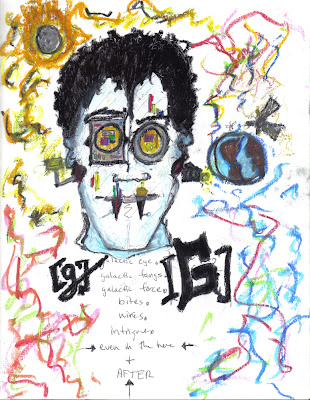